To The Ice Palace Of Aesandre 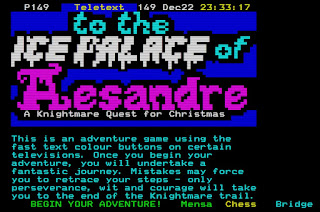 RESTORATION OF A LOST KNIGHTMARE "GAMEBOOK" FROM 1993

ITV's Knightmare was one of the most popular childrens' TV shows of its era and I, like many gamebookers, am a huge fan. An obscure and lesser-known entry in the Knightmare canon is the interactive Knightmare adventures presented on Channel 4's now defunct TeleText service, playable through the use of the FastText function where coloured buttons corresponded to on-screen options allowing you to navigate your way through the screens. Normally, each day C4 ran a quiz called Bamboozle which used this system but, on a few rare occasions (believed to be just three times), a Knightmare adventure was offered in Bamboozle's usual place

Obviously, TeleText itself in its original form is now lost to time, but a web archive containing pages from TeleText was shared amongst the Knightmare fan community in mid-2017. The archive contained all of the original pages from 22nd December 1993, the day when one of the adventures (To The Ice Palace Of Aesandre) was made available. I'm not 100% certain how these pages came to be recovered, but the story goes that if you still have a functional analogue FastText television, should you also have a VHS recording from the era, Teletext pages can theoretically still be accessed. Anyhow, some wiz transferred the pages from VHS to html and put the archive up on the web. That's where myself and fellow gamebook fan Paul Kelly came into the equation. I waded through the entire day's archive, identifying which pages were relevant to the adventure (and literally everything from that day was there, including the TV guides, news, cinema listings, music charts, horoscopes, FTSE indexes, traffic reports, etc etc), filtered out duplicate pages and corrupted pages, and, armed now with a single set of adventure pages, I then set about mapping what seemed to be the logical paths of the adventure and working out which choices linked to which pages. At this juncture it's worth pointing out a quirk of TeleText which I remember well from the time and that is that, as analogue TV could sometimes have a less than fantastic reception, TeleText page characters could go haywire and appear as gibberish. And that was exactly the case here as several letters were corrupted so all of these also had to be identified ready for replacing with the correct letters. Once I had the whole thing figured out it was over to Paul Kelly to code the pages and hyperlink the choices to recreate the feel of the original, the only real difference now being that instead of coloured buttons, the player just clicks on their choice.

The end result is a fully-restored and playable reconstruction of Knightmare: To The Ice Palace Of Aesandre in as close a version as is possible to the original FastText experience.