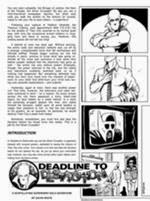 Anyone who has read my thoughts on Appointment With FEAR will know that I see it very much as the “best of times, worst of times” of the series. On the one hand, AwF was a superlative example of the gamebook art-form in terms of design and construction, whilst, on the other hand, it was a terrible example of an “adventure” in its truest sense, being far too short, overly reliant on bad jokes and “knowing” references, and lacking anything of any real interest for you to actually do. This sequel, published in Warlock #12, carries over many of the ideas from AwF as well as exhibiting many of its pros and cons.

Conceptually we once again have a choice of one out of four Special Abilities (the same four as before) and we can gain or lose useless Hero Points that amount to nothing other than acting as a comparative marker of your performance as a superhero from one playing to the next. The Special Abilities have less of an overall effect on how the adventure plays out than they did in AwF, but there are still minor differences in what can happen and events you can access, plus the eventual solution is slightly different for each Ability inasmuch as the street where the end baddie (The Dynamo) is hidden will have a different number based on which supervillain spilled the beans which, in turn, depends on which Ability you have. However, other than these two plot drivers, the mission (to capture The Dynamo and prevent him from turning Titan City’s nukes on it) will otherwise pretty much be the same for each.

The Steve Jackson-esque numerical clue idea appears again and you get three initial clues based on your chosen Special Ability, but one of the clues is effectively meaningless so there are some slightly better combinations than others, not that it really makes much difference overall and no Ability is any better or worse than any other. But, a big difference this time is that the moments where you need to do the relevant calculations are very clearly signposted here, unlike in AwF where you need to be psychic to work out when to subtract x from a current paragraph number to pursue a lead, which naturally makes this sequel rather easier by comparison in that sense. By contrast, combats are fairly challenging with most key villains having stats in double figures, whilst The Dynamo himself has Sk 12 St 20 and does an additional -2 St damage on each hit he gets in on you (ie all hits inflict -4 St damage on you by default) unless you use an Energy Drainer (which I can’t seem to actually find anywhere) which reduces him to Sk 10 St 16 (still strong) and removes his double-damage effect, which is a relief. Staying alive in general isn’t all that difficult and unless you get shot or blown-up (in a 50/50 bomb diffusal situation that is actually very realistic for once, rather than unfair, in its apparent arbitrariness), staying alive is just as easy as it is in AwF. The failure by unmasking is back, but this makes sense too, and does add to the comic-book feel. The big challenge in AwF was in cracking the puzzle but that is all but absent this time around and DtD is generally quite an easy proposition to win. There seem to be a lot of Skill and Luck tests for a short subject, but this does show that, superhero or not, you are still mortal and fallible, which I like the idea of – think more Spider-Man than Superman (in fact, Spider-Man is even mentioned as your “rival” at one point.) There is one additional mathematical puzzle which can only be found by taking a particular route and which is vital to success, but the calculation is, by FF standards, simple to do.

The mechanism whereby you should avoid killing your opponents is back again (reduce their Stamina to 1 or 2 and they surrender; kill them and you lose 1 Hero Point) as is the text’s failure to deal with their deaths and blanket assumption that they are always alive and able to blab to you after each combat, regardless of what actually happened. You would have hoped that this would have been resolved by the second instalment but the theory must be that you will never kill anyone as that would be out-of-character. A sensible idea in context, but ultimately nonsensical in continuity terms.

On the subject of continuity, the intro makes direct reference to your having captured The Titanium Cyborg in AwF (there’s even a picture of you doing this) and you are Jean Lafayette/The Silver Crusader again here. For some reason, though, you are not given the option to re-cycle your same character from AwF and continue from where he/she left off on finishing the previous book. There’s nothing to stop you doing this in principal and it does make sense to do so, even if you might be restricted to a particular Special Ability or a hopelessly low Luck score (which would give you little hope of winning), but, as we have seen, the nuances of winning with each Ability are far less impacting here than in AwF so wouldn’t really detract any and would probably make this feel more like an ongoing comic book saga.

AwF’s art made much of the comic book association, but this is less obvious this time around with less multi-frame images to visualise an episode (although there are lots of “BOOM” and “SWOK” intertitles) and this does diminish the affect a bit. The art is very clean-lined and bright, though, so there is a nice cheerful (and slightly manic) tongue-in-cheek comic book (as opposed to something dark and brooding as with the more serious-toned comics) look to the pages. The rather silly popular culture references are very much in abundance again, but they feel less forced and awkward this time in that they seem to be trying less hard to be funny and therefore slip into the text better. Yes, the fairly crappy super-villains are back (mostly animal-based this time, bar the Mr Freeze clone called Mr Frosty – a link to The Ice Queen in AwF, incidentally, which adds more continuity between the adventures) as are the plot devices of going to work, visiting a few sights, and going home to rest (a lot), meaning the mission per se just involves wandering around Titan City looking for clues as to The Dynamo’s whereabouts again, but DtD has a far longer core part before you are faced with needing to crack the puzzle’s secret. AwF had 440 sections, but played-out (without finding the hidden parts) in what seemed like about 10 paragraphs. DtD is only 200 paragraphs long, but the basic mission is much longer and you feel less short-changed even if you haven’t found the numbers you need to get to the main villain at the end. There is more to see and do in DtD and, due to its being less reliant on secret sections, it is more linear in approach. There’s even a follow-on to the episode in AwF where you could buy a copy of WOFM, wherein you find some FF books in a shop (which you have no idea what are!) and your informant, Gerry the Grass, tells you AwF is really good – cheap plug or open acceptance that sequels aren’t generally as good as the first parts, maybe? Or perhaps just a nice tribute to Steve Jackson from DtD’s author?

There are a few odd moments along the way that are inconsistent with the general flow, especially the lack of a Hero Point penalty for not bothering to apprehend Elastic Eddie (which is essential to get the main part of the secret code for the end) when failing to take any other super-villains in will affect your Hero Points, plus, as with most Warlock mini-adventures, there are a few (possibly only two, in fact) mis-linkings of sections which is frustrating, but this effort does seem better proof-read than most of the Warlock FFs, so we’ll count this as progress.

When I was younger I much preferred DtD to AwF. Once I’d figured out how to beat AwF and discovered its brilliant but complex design I have to say that DtD’s far more conventional linear approach makes it structurally much weaker. That said, as a straightforward adventure to be played through to completion in a couple of hours without the frustration of having to keep quickly failing and re-starting over-and-over, DtD certainly has some merit and it is more satisfying in that sense as it relies far less on your needing a sixth sense that tells you when to use your clues. There is less variety this time and there is essentially only one general route through regardless of your Special Ability (although slight digression is allowed if you want to keep it fresh on subsequent playthroughs), but there is still fun to be had by playing this FF. AwF fans will probably be pretty unimpressed by DtD, but those who want a simplified superhero adventure that doesn’t melt your brain as you try to fathom it out will find this an acceptable variation on a theme.
Posted by MALthus Dire at 19:36 2 comments: