By Mark Lain and Steven Leicester 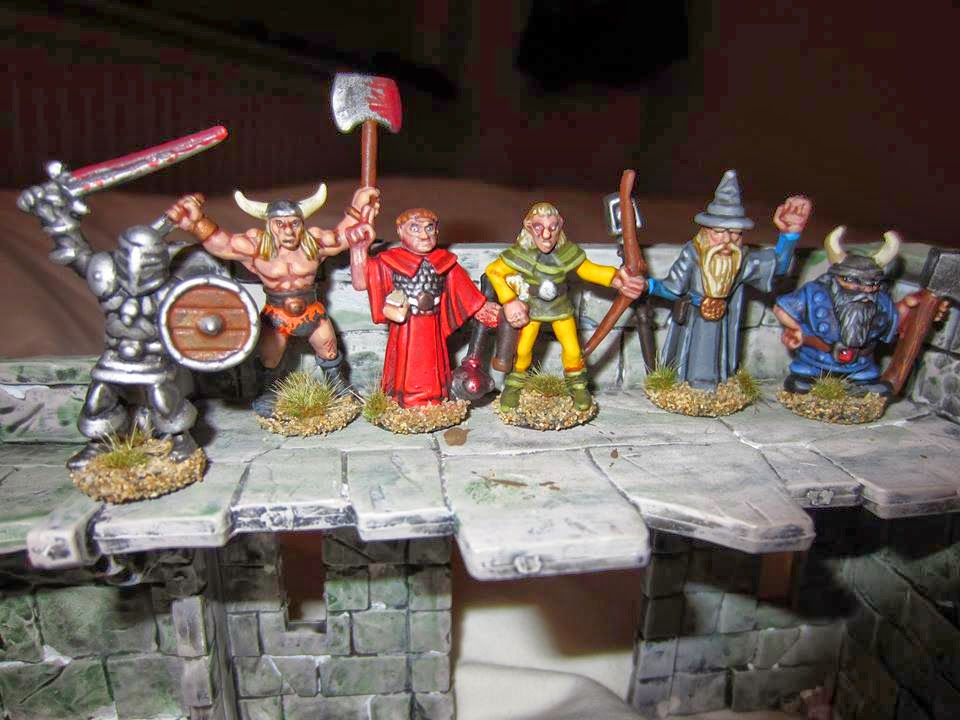 To accompany my imminent thoughts on The Warlock Of Firetop Mountain boardgame, this “General FF musings” post is on the subject of the six little plastic characters that act as playing tokens as you wend your way through Zagor’s mountain dungeon. As this is a boardgame, Games Workshop had the sense to give you miniatures to make the experience seem more like a table-top RPG (which, in a fashion, it is, given your freedom of movement etc) and in the box you get a Dwarf, an Elf, a Cleric, a Knight, a Wizard, and a Barbarian (fairly close to your rival NPCs in the Deathtrap Dungeon book then.) The decision on which one you choose has no effect whatsoever on the mechanics of the game eg the Wizard cannot use magic, etc, so these are simply place markers on the board. Let’s face it, whether you’re a hat, a dog, a boot, or a car in Monopoly makes no difference either so this sits somewhere between boardgame and tabletop RPG in my book, but we’ll leave the subjective angle for the write-up of the boardgame to be found elsewhere in this blog.

I originally got the game when first released and there was something a little lacking in shuffling these inch-or-so-high red plastic things around the board. Closer examination showed the sheer level of detail (not too far from that found in metal miniatures) on the figures and it was pretty clear that a decent paintjob would raise them to the stellar standards of the metal minis that some of my gaming friends were so covetous of and of which I was so envious. A few trips to Games Workshop to watch and chat with the clever people who showed up there purely to get access to free paints showed me some of the techniques involved and I was convinced I could pull this off. To put this in perspective, I was 12 or 13 at the time and not bad at making model aeroplanes so I assumed the skills could be transferred. I started with the easiest one, the Knight, and, after a couple of coats of silver, the project was cancelled due to there being no correlation between my aircraft modelling skills and my (total lack of) skill in painting things that are highly detailed and only 2 centimetres high! So five red and one half-silver figure remained employed as the player tokens for WOFM boardgaming sessions.

Fast forward another 18 or so years and, now in my early-30s, I have become quite a dab hand at building most kinds of scale model. Cue another attempt at tackling the WOFM figures. This time all six were included and now all six were ruined with shoddy paintjobs using eggshell railway modelling paints that look great on trains but ridiculous on little fantasy people. So the figures got stripped which left them semi-pink due to the stripper bleaching some of the colour out of the original red plastic when it lifted my crappy paintwork... and thus, the six little characters got dumped on my modelling bench and sat in disgrace for just over seven years whilst I tried to find a solution to what was becoming the longest modelling project I had ever attempted and made the four years it took me to still not yet finish a Merlin helicopter kit for my step-brother seem like a quick-looking turnaround.

We are now in mid-2013 and a friend from Facebook’s FF groups happens to post some pictures online of some figures he has painted for a figure painting competition (what else?) Suitably impressed, I email him on the off-chance he might be willing to draw the final curtain on the seemingly never-ending saga of my WOFM boardgame figures and their journey towards having some life and colour to them. I pass the Luck roll and Steven Leicester agrees to take on the commission and, finally, my almost 30-year-long crusade to paint my WOFM minis is at an end. And, in the true WOFM-style collaborative spirit we are now at the river bridge, so we must pay the ferryman to cross over and from here on, in Steven’s words, this is how it was done...

I'd known MALthus for a while from enjoying his blog and some banter on the Fighting Fantasy fans page via Facebook. We share a similar taste in music, went to the same University, and are both FF obsessives!

He'd seen some of the miniatures I had been painting for my own pleasure, which I had posted images of on my own Facebook page, and had some complimentary things to say about my work. It was then the proposal came through.

"Do you think you could help me realise a 25 year long dream?"

At first I wondered what on earth he could be getting at, but it then became clear the painting of the miniatures featured in the WOFM boardgame was the goal. Well how could I refuse? I own the game myself, and my own set has stayed unpainted for a good few years. Thought it would be good to try someone else's before tackling my own.

Now some of you may be thinking this is what I do for a living. As nice as it would be to earn my crust painting miniatures, I'm by nature quite a slow painter and I couldn't get enough models done to pay my way! For me its always been seen as nothing more than a relaxing hobby, and I would urge anyone who thinks they might enjoy it to give it a go.

I haven't been painting that long myself. I first picked up a paintbrush in anger around three years ago, and as most miniature painters will tell you, for the first few months my efforts were appalling. But like anything, persevere and you WILL get better. If you do take it up here are my top tips for any beginner:

·         Don't get disheartened at first. Keep at it and you will improve.
·         Make sure you have a good lighting source where you paint. A daylight lamp makes a world of difference.
·         Make sure you always use clean water, and never take the paint straight from the pot. Always water it down a little first on a pallette.
·         A few thin coats are better than one coat that is too thick. Slapping the paint on will obscure the detail on your models.
·         Get a good tutorial book. I'd recommend How to Paint Citadel Miniatures from Games Workshop, as this has been a huge help.
·         Get the best brushes you can afford. I use Winsor and Newton Series 7 brushes. Yes they are around four times the price of non sable hair brushes, but they will last for years and always come to a nice point.
·         Don't be lazy! Clean up after your sessions. Your brushes will thank you for it. Use a brush cleaner after every session. I'd recommend 'The Masters' brush cleaner.

So what are the stages to painting a model? I'll quickly run through these to give you an idea of how to go about it. First you need to have an assembled and built model! Luckily the WOFM miniatures are all one piece so you're good to go with no assembly or clean up. Don't be fooled into thinking painting is quick. I'd estimate each of these models from start to finish took me around 3 hours each.

Stage 1 - Undercoat
You'll need an aerosol can of black spray undercoat/primer. I use either Army Painter black spray or Games Workshop ‘Chaos Black’ spray. You can get loads of other colours than black, but black is good for beginners. Take your model outside and give it a quick undercoat. Stick it to some wood with double sided tape to keep your hands clean! Don't go mad either with the spray, you want to nice thin coat, not a deluge. The undercoat will give a nice smooth surface to paint on. 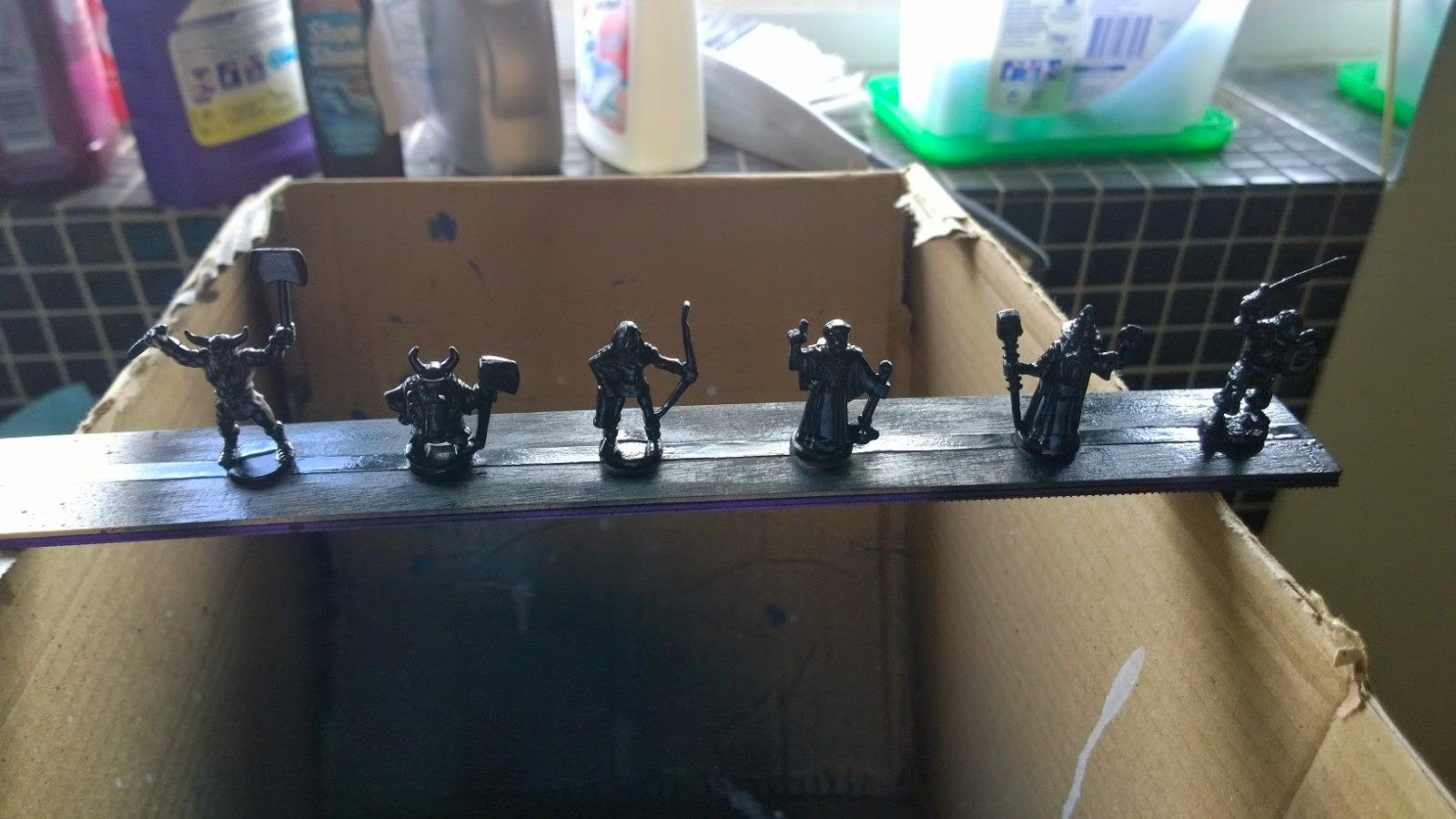 Stage 2 - Basecoat
Apply a primary base colour to each area. For the Wizard miniature I used a dark grey for his hat and cloak, a sky blue for the undergarments, dark flesh for the skin, gold for the belt, desert yellow for the beard, sliver for the staff top and brown for the staff handle. 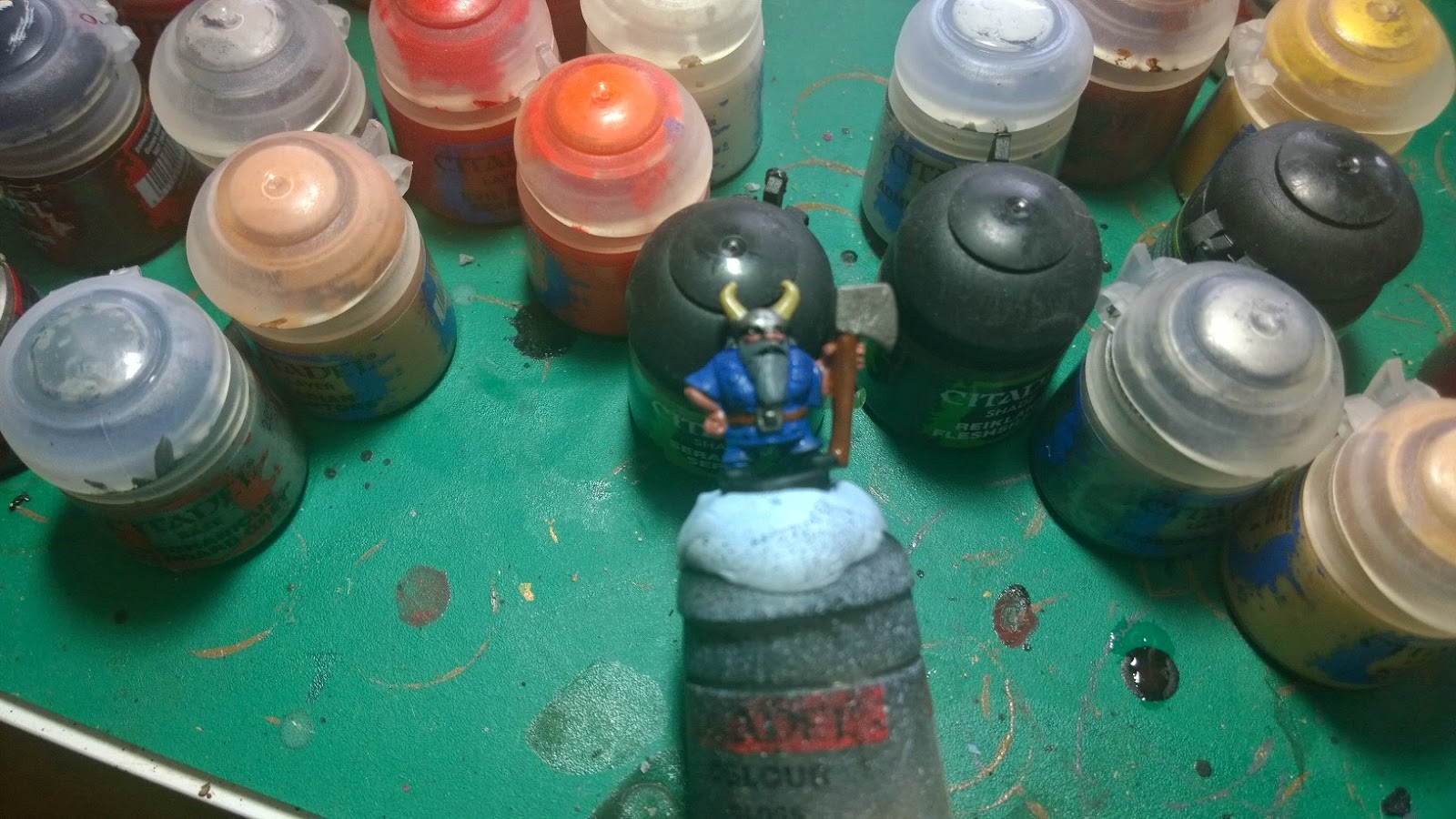 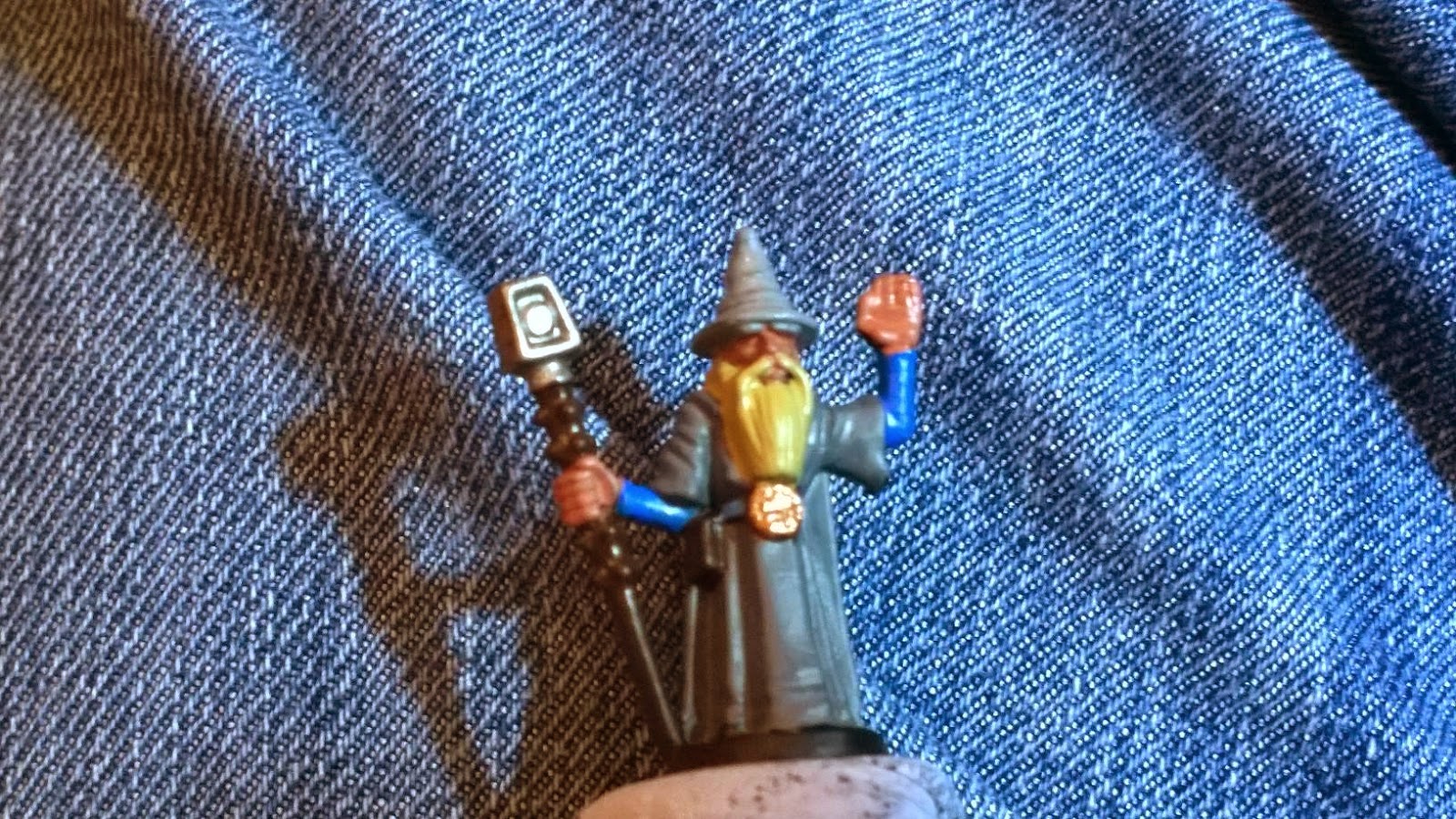 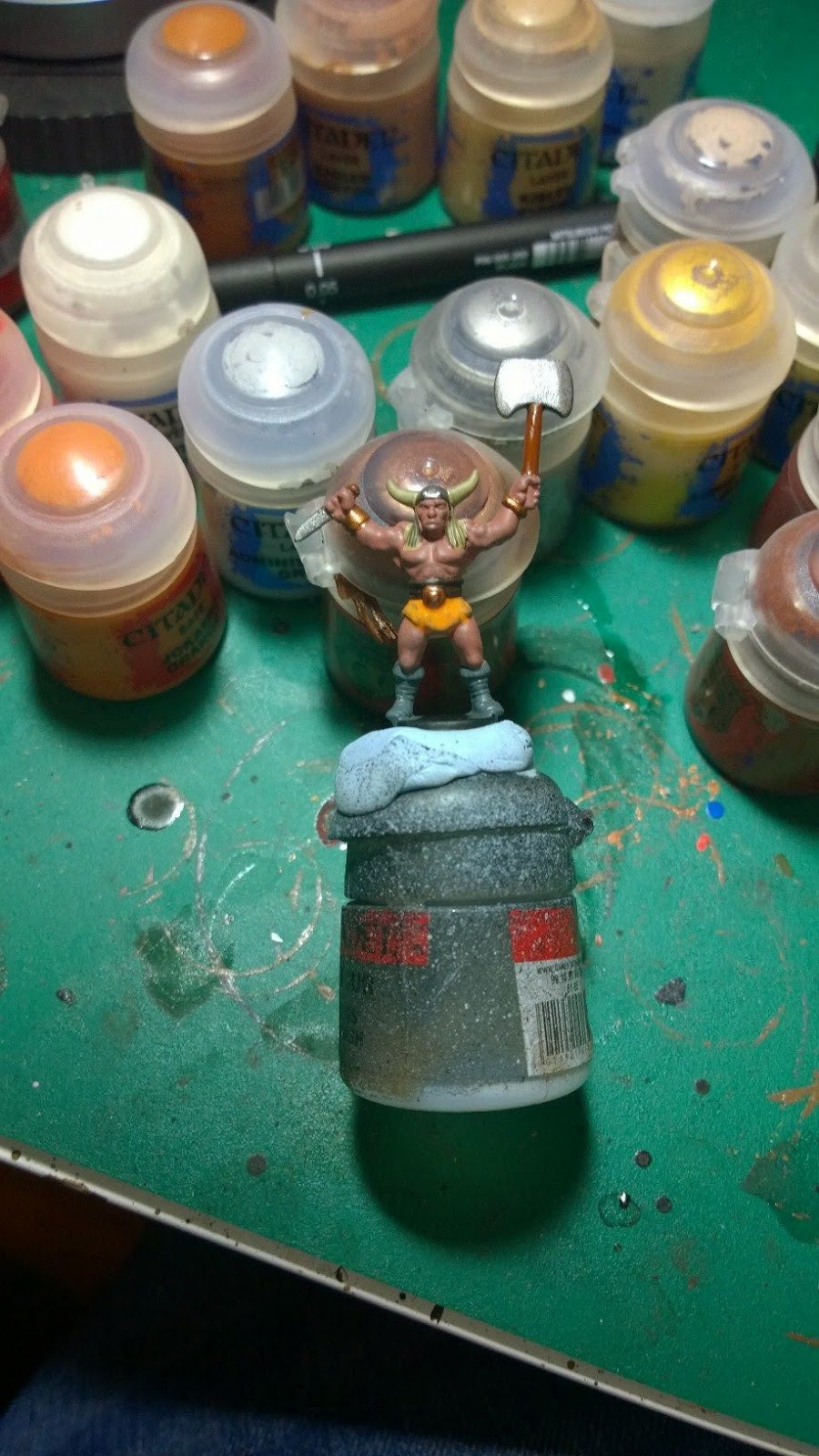 Stage 3 - Wash
A wash is a very thin paint, specially designed to flow into the recesses of a model to give shade and definition. Black wash was used on the cloak, hat and staff top. A brown wash was applied to the staff handle. Flesh wash to the skin and finally a sepia wash to the beard. 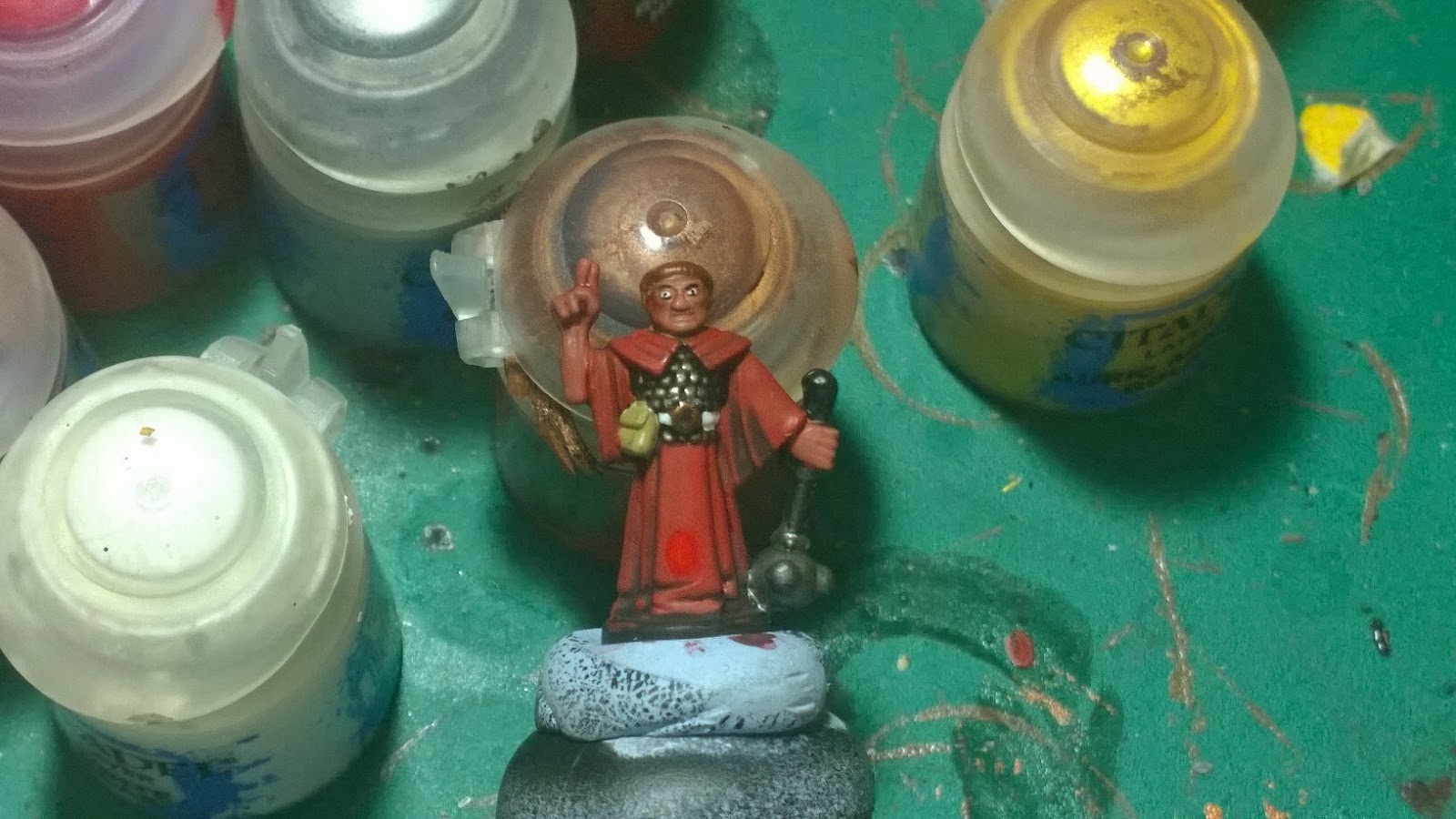 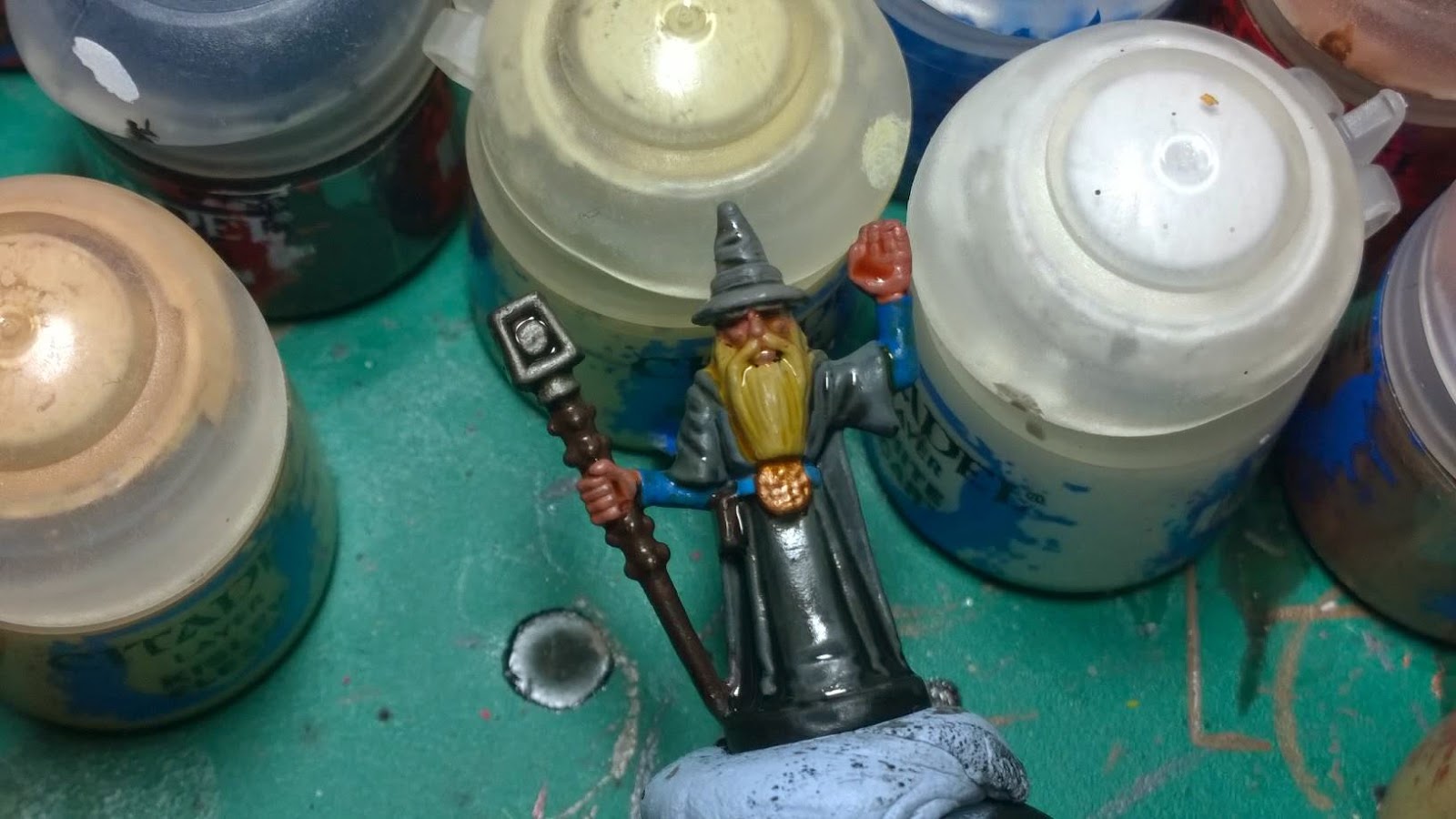 Stage 4 - Neaten up
Use the same base colours to neaten up any wash which hasn't dried in the recesses.

Stage 5 - Highlights
Simply use a lighter shade of your base coat colours on the edges of the model or any raised sections to create natural highlights. 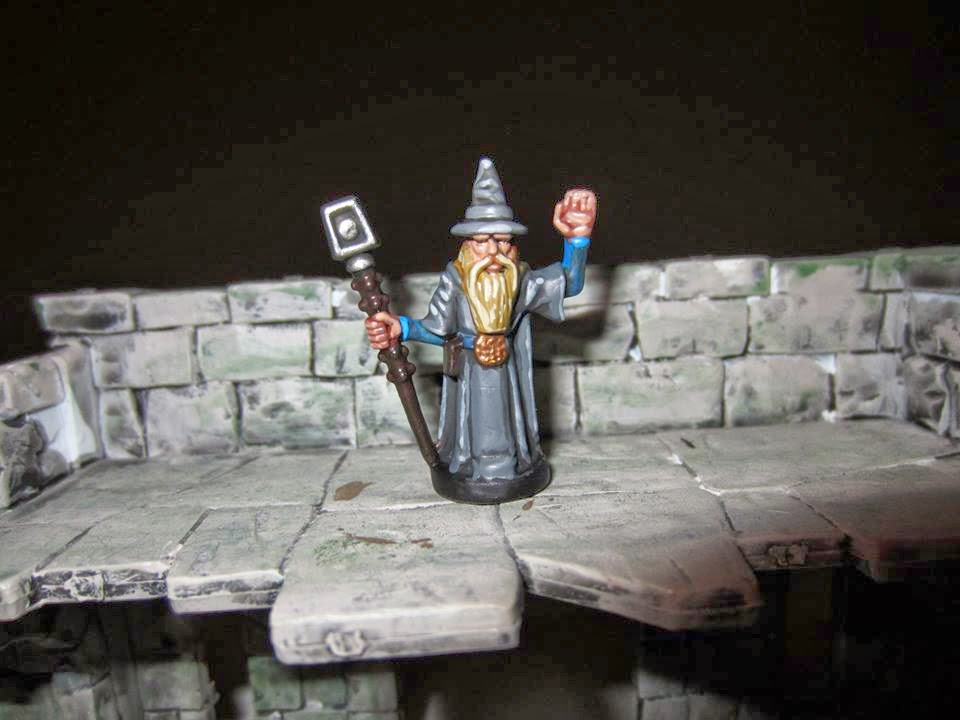 Stage 6 - Basing
Using PVA glue, apply sand, slate, rocks, artificial grass - anything you like really, to the base of the model to add character. 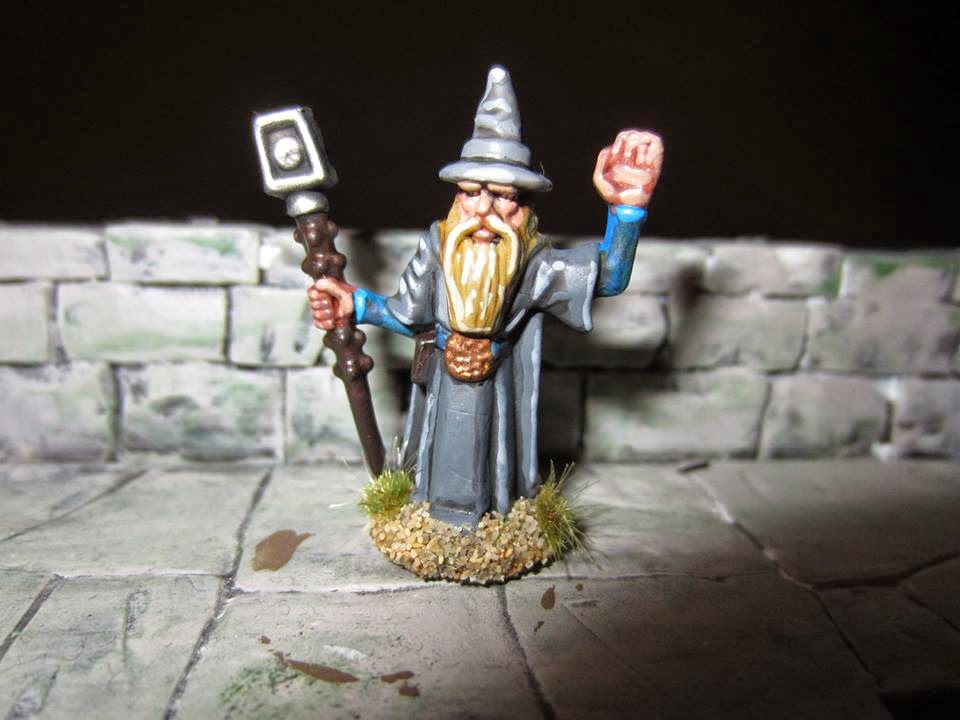 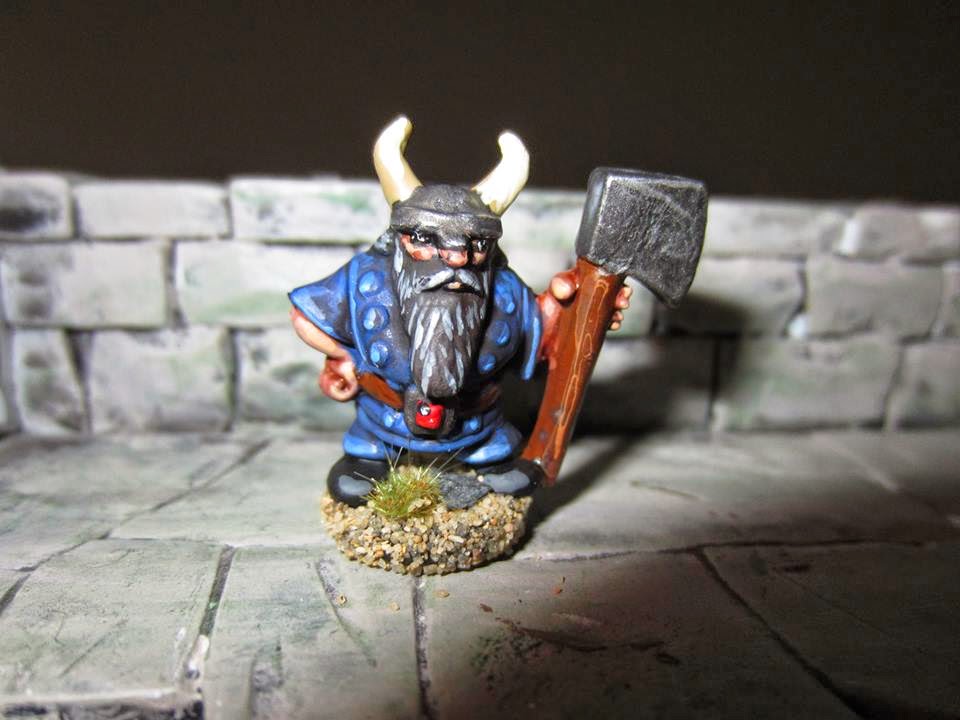 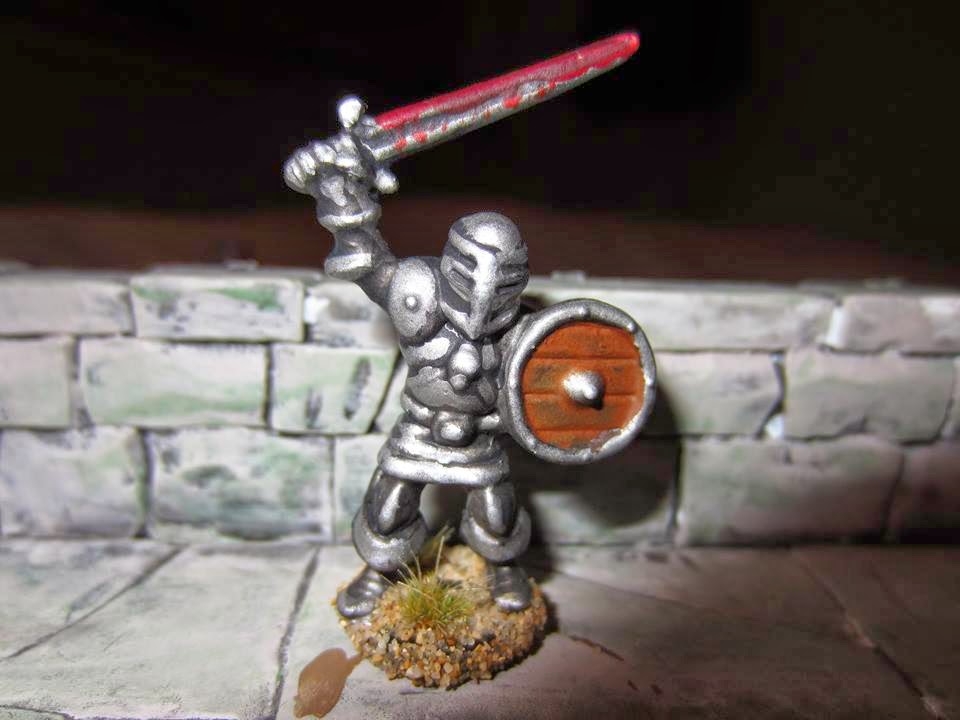 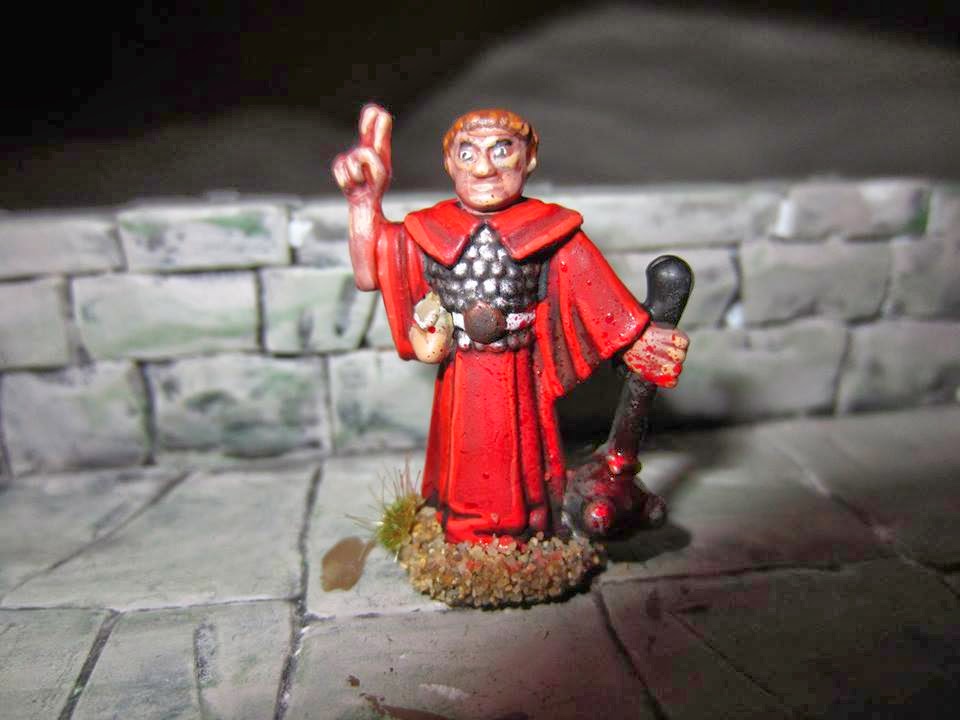 If you're painting models for gaming, such as the ones from WOFM, you will need to give them a spray of varnish to protect them. This is done in the same way as Stage 1. 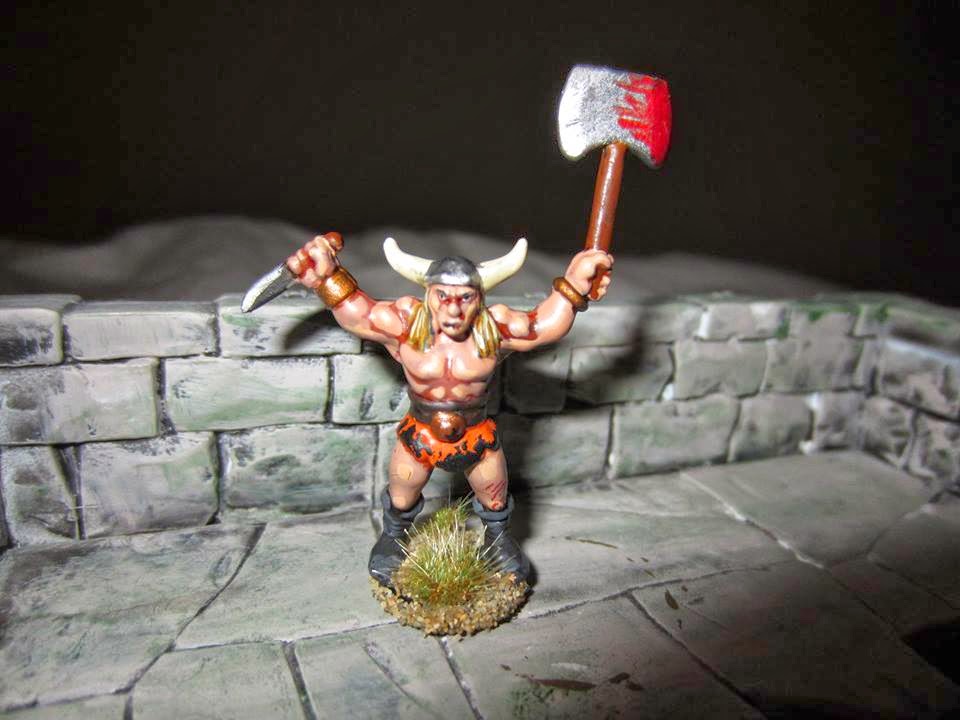 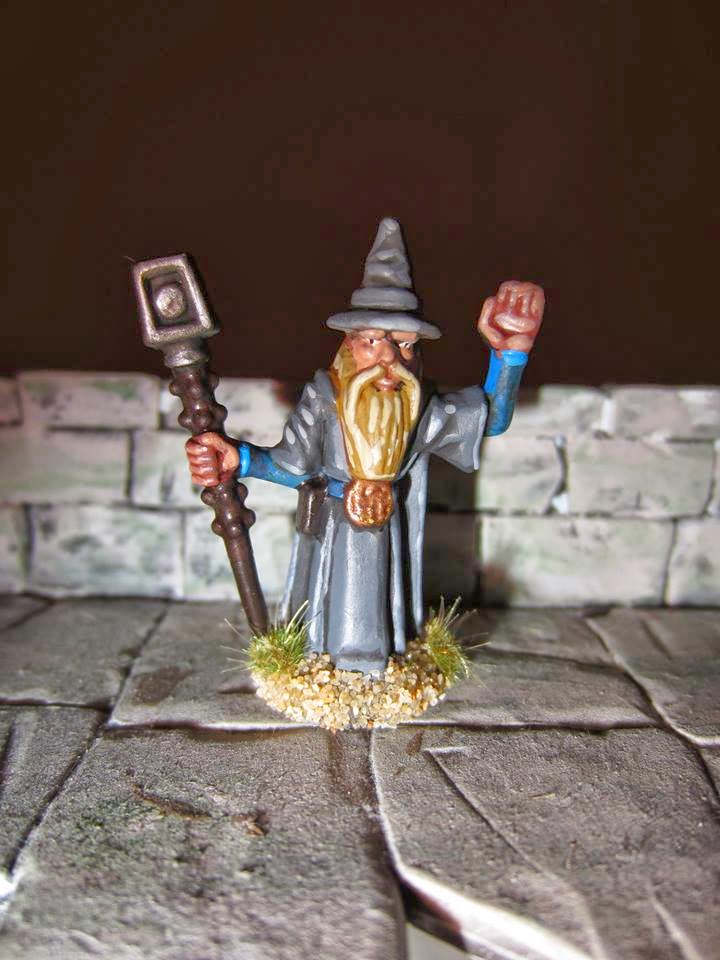 I could go on for several pages, but most of you would have fallen asleep reading, or vowed to never visit this blog again! As I said earlier if you want to know more, YouTube, websites like Cool Mini Or Not, or the excellent How To Paint Citadel Miniatures book offer a wealth of information.

So what are you waiting for? Pick up a starter box set of models, some paint, glue and brushes and give it a go. You might find out you love it as much as I do. You might also find you get mentioned on Twitter by a certain Mr Ian Livingstone, but I'll let MALthus pick up the story from here...................

So now I am the proud owner, after many years, of six beautifully painted and finished WOFM minis. The only problem is that now my Legend Of Zagor figures look distinctly uninteresting in their black and cream plastic and, it seems, so do Mr Livingstone’s, but that’s another story. For the timebeing I’m rolling two dice against my Luck score to see if the Trickster Gods of eBay will allow me to win the Limited Edition metal Warlock figure (from the cover of issue 10 of Warlock magazine) so that Mr Leicester and I can collaborate on a second project. Until then, MALthus Dire and Steven Leicester Present... (only kidding!)
Posted by MALthus Dire at 12:55

Some great FF and gamebook pages that we like here in the Black Tower...