Escape From The Sorcerer 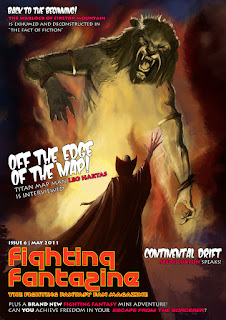 ESCAPE FROM THE SORCERER

From what I gather, this mini-FF was originally written in 1988 as a 115-section amateur piece, but the version that would appear in Issue 6 of Fighting Fantazine was reworked to be set in Southern Allansia and to run to 200 sections. However, the part of Southern Allansia where this is set is largely unexplored territory (within the cannon as a whole) but the author vividly and thoroughly brings it to life with the massive amount of lore in the background section. This obscure area of Allansia has distinct overtones of Middle Eastern or maybe the Kashmir border situations and the amount of information can be a bit bewildering initially but, in terms of setting the scene, this is a great opening and is to be applauded for its depth of socio-political design as well as its distinct cultures and species.

YOU are an Alkemisian prisoner who has been captured by the rival territory of Agra. In fact, you are the only prisoner from your group of captives that is still alive and, rather than wait for your turn to die, YOU decide to escape, er, from the titular Sorcerer (named Grudar Kreshnel) who is running the show. As you are a captive, you logically begin with no weapons (and take the requisite -2 starting Skill penalty until you can find a weapon) and no Provisions. In fact, you start with absolutely nothing at all which, again, does make sense even if it gives the impression that you are somewhat on the back foot in the initial stages. Curiously, any Provisions you do find along the way will only restore 2 rather than the usual 4 Stamina, although you can quickly find yourself weighed down with them as you find a lot of Provisions, especially in the initial areas, so the lessened restorative value makes very little difference to your chances of survival. What definitely makes a difference to our chances of survival though are your Skill and Luck as you will need very high initial scores for both of these if you want to stand much chance of getting through this as many foes have high Skills and adjustors (take the Giant Cobra for example which has Sk 10 St 16 and will kill you if it wins any single Attack Round, although you can avoid this fight if you have a particular item gained from a previous tough fight) and there are umpteen Luck tests that often lead to death if failed. Particularly vicious Skill-wise is the opening salvo where you must fight several guards in succession to get a weapon and get out of your cell area. Take into account that you are initially fighting with -2 Skill and this part really is very brutal. Perhaps this is why you can find so much food? Furthermore, any Agrans you meet have a unique ability in that they can turn invisible on every even-numbered Attack Round which allows them to roll 3d6 rather than 2d6 when calculating their Attack Strength ie they can have an AS of up to 18 before you have even added their Skill to it! This is pretty harsh and really quite ridiculous in difficulty terms. Plus this adventure is very linear and the only real options for digression are in the opening area, but as this is fundamentally a dungeon trawl, this linear approach is standard for FF so we can forgive this even if it does make winning rather challenging.

As this is an underground prison complex, the map is typically full of corridors that head away in all sorts of north-east-west directions and you very frequently find doors. Whilst this may seem a bit samey after a while, it is a logical design for what it is. I must admit that I found mapping this a bit mind-boggling but it does all link up rationally if you take the time to plot it all out and, as each playthrough will follow just one set of paths and directions, the overall labyrinthine web of corridors and doors is not that distracting when playing. There is also some respite in finding an underground river which you can choose to negotiate by boat (assuming you are not following the true path on that particular playthrough!) Indeed, the whole piece is very logical with a well-designed plot running through it as you meet many guards which, along with the map overall, do make this all feel very prison-like. Add to this the way the background’s lore is neatly woven into the adventure and the unexpected twist at the end involving a dissident you befriend very early on (yes, there is a lot of politics here) and you have a very satisfying and fun dungeon bash. Furthermore, there are several ways to kill Kreshnel at the end (dependent on what items you might have) which adds replay value.

We touched earlier upon your starting lack of equipment and the general difficulty of this FF in terms of combats but this is tempered not just by the supermarket full of food and drink that you can quickly find yourself carrying, but also by the ton-weight of items that you can find, all of which make combats much less crushing: not only does the silver sword increase your AS by 4, but you can also enhance your firepower with zybarium, a ring of distraction, the golden mace, and the fireflash staff. There is also a location where you can find three Potions to improve Skill, Stamina and/or Luck, plus there is a further Stamina potion later on and two opportunities to restore all of your stats back to their Initial levels. Oddly enough all of these bonuses, when offset against some of the very tough fights, do result in something pretty balanced overall, even if the linearity will still go against you. What really makes this one interesting difficulty-wise though is the mechanic it steals from Creature Of Havoc whereby you must decode a language to beat the adventure. The system for the code is by all intents and purpose that used in CoH but you do get two chances to find how to crack the code which does make your life a bit easier. There is also a Hobbit prisoner which may or may not be an intentional nod to that book too (although you can’t eat this one lol).

A really surprising aspect of this mini-FF, considering its political overtones and the world-building, is the vein of wry humour running through it. Take the amusingly-named Chattermidgets for instance, or the Puflin which is a cross between a Puffin and a Wizard (get it?) representing rival publishers who once vied for the rights to publish Kreshnel’s memoirs. Rather more bonkers are the two chefs named Ramdon Gorsay (Gordon Ramsay) and Zildo Alli (Aldo Zilli) who try to con you into a sticky end – Ramdon is even foul-mouthed to boot. These two even name-check their rival (Olie Jamie ie Jamie Oliver) and hilariously describe him as a “complete imbecile” (which gets my vote). If this is not enough, there is a brief visit to the underground prison complex’ Human Resources office where you can even end up going through a recruitment assessment to join Kreshnel’s army, plus you can meet the person who was actually meant to be attending this, called Freddi, shortly beforehand to add yet more plot flow. The only humour element that did irritate me was the verbal “oh yes I will/oh no you won’t” sparring with Kreshnel at the end, although maybe we are literally supposed to view him as a Pantomime Villain? There is a neat little meta moment along the way too where you need to give a NPC a pair of dice from which she draws her power – clever. What is also very clever and a feature I really liked is the door mechanism for Kreshnel’s lair. This is activated by balancing a set of scales and requires you to do some basic maths (although just guessing what the answer might be also works!) This is very Crystal Maze and suits gamebooks perfectly. It is also a nice alternative to the usual fallback of a numbered key.

If there is only one part of this FF that I found odd it is the large amount of Gold Pieces that you can find along the way, none of which serves any useful purpose at all as at no point do you need any money. False flag, perhaps, or just another necessary FF trope that founds its way into this?

Unusually for a Fantazine mini-FF. this one features art by a professional. Michael Wolmarans is better-known to the gamebook scene as Mike Tenebrae and his work always has a dark neo-horror quality to it. I don’t think he has been given much opportunity to demonstrate his generally superb art here, but there are three images where his dark brilliance is used to the full: the Giant Cobra is beautiful in its blackness contrasted with bright areas, his Kreshnel is full of classic Eastern evil mystique, and his interpretation of Artriv is truly sinister. What shows off his ability much more though is his cover featuring Kreshnel fighting a massive bear and the brown and yellow tones work really well here to create a lot of subtle atmosphere and animation – the image almost crackles and moves as you look at it. Brilliant stuff.

Equally good (especially for an amateur) is Prasannan’s writing which is full of description and colour to really brings life to what could have been a very dull trudge down a lot of passages and through a lot of doors. He seems to revel in presenting his characters and every NPC has personality and seems very real, as does his world in general given the depth of lore and effort that has gone into this offering.

I have to say that, for what is ultimately amateur fan fiction, this is very good indeed. Its lore, very real overtones, occasional humour, and characters, all work very well and raise this well above the bar for a fantazine effort. They are rarely bad as such, but they are also rarely this professional feeling and this is definitely better than a lot of the published gamebooks out there. I would have been interested to see how this might have opened out into a full 400-section FF - would we have seen more of the society of this region or would it just have eventually turned into a tedious dungeon slog? Either way, in this form, this is really good stuff and, with Wolmarans’ art to boot, this is a winner even if it might take you a lot of attempts to finish it as it is pretty difficult in real terms. It's just a shame it has such an uninspiring title.